The narrative in this book is a chance to follow the life of a Mennonite pioneer girl, born in a sod house in 1896 - when this was still part of the North West Territories and not yet born as the province of Saskatchewan in the Canadian prairies. It follows her through her growing up years, and then marriage and bearing 11 babies, and all the ups and downs of their lives through many events.

If you should be one of the many descendants - or relatives of this clan - you may want to read this book to see whether you or your parents are mentioned as guests in my grandparents' home. Since I've added a number of photos (maybe I should stop to count them), you might even see one of yourself.

Even if not mentioned in the narrative, you could end up in the genealogy charts as a descendant of one of Gr'ma's 67 Friesen cousins, or of the 81 Neudorf Cousins. You might find some surprises about your own ancestors there!


An Inspiring story, with updated genealogies for the Friesen, Neudorf and Kroeker Family Trees - including the other branches! It has 318 pages, with a number of photos throughout; all for $25.00 (The original, hand-bound book was $30).

You may, of course, print out the e-book and bind it yourself. See how to print and bind this eBook in several quite economical ways. You may contact me if you have questions. 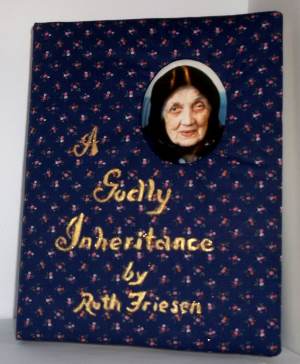 A Godly Inheritance - is for those who want to meet my beloved Gr'ma and discover what makes a godly woman, and also to see how I cared for her those 9 months while we waited for the nursing home opening. Yes. this book is for you if you are interested in family sagas and how to care for your parents or grandparents when they will need personal care.

This is a family history book, written to honour my beloved Grosz'mama, or Gr'ma. I started in 1985 and completed the first edition in October 1988, after taking a break to care for dear Gr'ma at my parents' home for nine months, until there was an opening for her at the Rosthern Nursing Home. Mom was not well either, so it fell to me to stay up most nights to care for Gr'ma, deal with her endless questions, and to keep putting her back into bed. Even though she could hardly see any more, she taught me her Gothic handwriting alphabet - so when she was in the nursing home I could focus on translating her journals - thus writing most of the book from her perspective. This clearly showed how important family members and her faith were to her.

Gr'ma was the ultimate hostess, always welcoming guests warmly into her home. She was like this even when her memory failed her. I learned to love and appreciate her even more in those last few years. Truly, I feel she gave me a godly inheritance that I treasure!

Now, 33 years later, I've transcribed, abridged and improved it in 2021 for this e-book edition.

I Can't Resist Telling You the Background Story

After I'd moved back to Hague from London, Ontario, to help out my parents, I visited my Gr'ma in the Altenheim (Home for the Aged) and told her, "Grosz'mama, I'm going to write a book about your life, and share with the other cousins and their children the example you have been to me."

My Gr'ma pursed her lips demurely and agreed, "It's always good to write down the important things for the later generations to read." This would be our gift to her descendants.

Just think; what if our forefather, Isa Brand von Riesen, back in the early 1800s had prepared 100 copies of his forefather's history highlights, maybe drawings too. Now there are thousands of his descendants who would consider themselves fortunate to own one of those copies.

Perhaps more than Gr'ma's other 35 grandchildren, I've got vivid recollections of both grandparents, and most of my uncles and aunts. I love to tell these stories too.

Gram'pa Kroeker was a huge silent man, a giant in my eyes, a man of few words, and of whom I was terribly shy. One time he picked up a story book of mine from school as I was sent out to check on my brothers. When I returned I didn't have the courage to ask for it back. Another time he handed me a big fat adult book as a gift. (I think someone had given him a free Readers Digest sampler of adult novels).

Maybe my chattering grated on him, for once he stopped me in my tracks by muttering, "I vish you was a radio - I'd svitch you off."

It was really Gr'ma who brought us up. Mom was sick, and in and out of hospitals so often that Grosz'mama, (as we said in Low German, and we were taught to address her in Low German out of respect) - yes, Gr'ma was my mother-figure and high tower of strength and godly wisdom.

Oh the stories I could tell! Like when the rooster chased me the long way around to their familiar door, and how teenage Uncle Henry swizzled that rooster in the barn cistern to bring him to his senses. Of berry-picking holidays when I could sleep over, but was under orders to make myself useful to Gr'ma. Of watching visitors coming and going at that house. Of the excitement in the air when Gr'ma got word that some of our uncles and aunts and cousins were coming to visit. Sometimes from B.C., or Quill Lake. How we children cavorted all over the back pasture with our cousins and got acquainted.

However, this is Gr'ma's story and I'll let her be the star. Most of all, her attitude towards people impressed me. Whether her cousins or mine, or just friends of some distant relative, she treated each one with dignity and respect. I can still see her, upon noticing a car turn into the drive between the caragana hedges, hurrying to put on her black kerchief with the tassels and embroidery before going to the door. If there were men she must have her head covered according to the teachings of the Old Colony Church.

When my uncles and aunts tell me that their family was the poorest in the village and looked-down-on by the rest of the clan, I marvel. I thought all the world revered and honoured Gr'ma. Her guests praised her cooking and raved about her gardens, and extolled her excellent memory. Sometimes they came specifically to ask Gr'ma to recall the date so-and-so was born, or baptized, or how long he was married to his first wife. She usually had such information at the tip of her tongue, but liked to defer to her Register to confirm it.

Though Gram'pa's father had once been a school teacher back in the 'old country', Gram'pa had never had any reading or figuring lessons except what Gr'ma taught him the first winter they were married. So it was Gr'ma who always read their nightly Bible chapter. I was about 9 when I discovered this. I had just earned a brand new Bible in Sunday School for my memory verses and her example inspired me to start such a daily devotional habit of my own.

Unwittingly, I absorbed Gr'ma's faith, her integrity, her abiding curiosity in people and books, and took her for my role model. I know this is a different era and time, and I wouldn't try to repeat all Gr'ma has been through, yet today the greatest compliment anyone can pay me is to say I'm just like my Grosz'mama. These, and more of her character traits are her legacy to us and to future generations yet unborn. Somebody should put it down on paper! Well, if nobody else will - I'll try!

What I had thought would be a four month project from New Year's Day in 1985 took me three years, because Gr'ma became ill, and ended up in the Rosthern hospital - her very first hospital stay in her 89 years of life. Then she came to stay with us until there was an opening in the Nursing Home.

I ended up learning to translate from the handwritten, or Gothic German Script, as Gr'ma and I struggled over her journals with a magnifying glass because her eyesight was failing. With her help, I learned to decipher it, and gained a new and marketable skill - translation.

Since her memory was no longer reliable, I had to do serious research to get a full count of her cousins and their families. While I only meant to confirm some of the things in her Register, I gained large blocks of more data, plus a growing network of new friends.

The appendix of genealogy charts were built from Gr'ma's Family Register, but since I published that book by hand, cranking the pages off the old Gestetner behind the furnace in 1988, much more information has come in to me. What was to be a book to honour Gr'ma has grown in more ways than I first imagined. I got bit by the "Genealogy bug"; I kept trying to set it aside, to contain it to a mere hobby position - but sometimes it does get out of hand!

The Kroeker branch still needs some major break-throughs, but just now it is time to present the data collected on our Family Tree. Oh, how it has G R O W N!

I've also taken time to insert many more photos - even coloured ones - than what were in the first edition.

I had Gr'ma's nephew, Rev. John D. Friesen, proof-read the first manuscript, and he said some would enjoy the stories but he knew that many - who were very aware of her Family Register - would look for it first, and would wonder at me, if I didn't include it. However, since her memory had been slipping the last while that she still lived in her own room at the Altenheim, I should maybe check to make sure her facts were correct before I inserted all that. Oh dear! That was a 3 inch 3-ring binder I'd given her for Christmas when I was still in London, Ontario.

But Mom had taught me to be thorough with every work I started, so I tackled it and researched each family as well as I could, learning some good research skills in the process and finding much more information than what she had gathered! All of that adding many months - even years to the book's gestation.

For instance, when I discovered how many Friesen First Cousins Gr'ma had (67), I set about learning how many Neudorf First Cousins she had, for her mother was one of 18 siblings of one father, Jacob Neudorf. Some died in infancy and a few while still young adults, however, my final count came to 81 First Cousins on the Neudorf Side!

So yes, this book also has that Family Register, but much MUCH more improved now over the 1988 edition. Yet. . . If you know anything about genealogy you know this is a never-finished project!

The first 100 copies were distributed to Gr'ma's children and grandchildren. The second 100 copies sold easily from our house in Hague after I posted a press release with a photo of Gr'ma and me looking at the book in the Saskatchewan Valley News.

If you wish, you may read the first few pages and the first chapter about Gr'ma's Forefathers starting on this page of this site.


P.S. In case you need this; I have a page on this site, How to Make Print Copies of e-Books

Want to check out my other eBooks on the Order-Page?